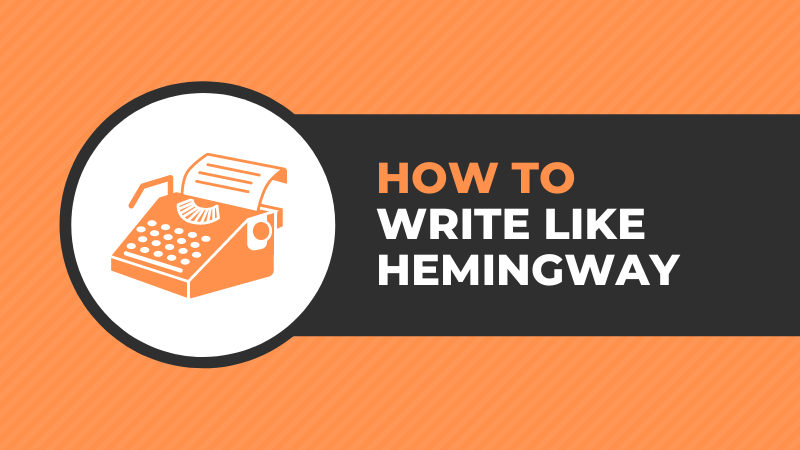 Ernest Hemingway wrote in short sentences and used simple vocabulary. His stories were captivating yet easy to read.

This unique writing style helped turn Hemingway into a cultural icon. His novels and short stories are considered classics, and he even won the Pulitzer Prize for Fiction and the Nobel Prize in Literature.

Although Hemingway’s fame has never declined, he is once again having a moment.

Modern writers and editors are taking note of his adherence to a particular set of stylistic rules, and learning how to write like Hemingway.

The reasoning behind this resurgence? Well, there’s intense competition for readers nowadays. Attention spans are shorter, so headlines are snappier. Text is read on tiny screens during spare moments. Through clicks and website bounce rates, writers are encouraged to get to the point.

Successful writers balance depth, brevity, and readability. In pursuit of those ideals, there’s no better role model than Hemingway.

Hemingway advised, “Show the readers everything, tell them nothing.”

In other words, don’t describe your topic. Bring it to life. Deliver substance.

Hemingway crafted marvelous stories and addressed complex themes. He told tales of bullfighters, soldiers, and fishermen. His protagonists grappled with love triangles, civil war, and the elements of nature.

Through it all, Hemingway wrote at around a 5th-grade reading level. Brief sentences, simple grammar, and easy vocabulary were hallmarks of Hemingway’s style.

Want to learn how to write like Hemingway? First, find something worth saying. Then say it — as quickly and clearly as you can.

If you want to learn how to write like Hemingway, check out some of his books. Then, spend some time emulating Hemingway’s writing style to see what the hype is about.

Here’s a look at how you can better channel Heminway.

According to Merriam Webster, “fluff” if inconsequential. It’s writing that adds words without adding value.

Fluff might be a word, a paragraph, a recurring statement, or an entire piece of writing.

To fight fluff, you need tangible action points. Figure out what your writing can do without, and eliminate it. For Hemingway, a distaste for adverbs and adjectives helped keep his sentences short. Every word counted.

Do you find yourself writing fluff to make a section “long enough?” What you’re lacking is a sufficient number of things to say — not a sufficiently long way to say something. Don’t look for new words and phrases, look for new facts and ideas.

Hemingway’s sentences were short. They were direct. They flowed.

Of course, “write short sentences” is not the blueprint to success that some make it out to be.

The real secret is to use varied sentence length.

Write a short sentence. Then write a sentence that’s slightly longer. Then, when the content calls for it, capitalize on the rhythm and space you’ve established by really driving home a point with a long, cascading sentence.

Most writers need occasional reminders to reign in their run-ons. There’s an app for that, and it bears Hemingway’s name. Paste your text into the Hemingway App, and the program instantly highlights your extraneous or problematic words. The app color-codes your adverbs, passive voice instances, and hard-to-read sentences. It’s an easy way to learn how to write like Hemingway.

Hemingway said that writers should “be positive, not negative.” This isn’t about a cheery disposition; it’s about word choice. The idea is this: use words that describe existence rather than absence.

Positive writing builds rather than tears down. Like the other methods for learning how to write like Hemingway, positive word choices create direct and accessible writing.

“Poor Faulkner. Does he really think big emotions come from big words? He thinks I don’t know the ten-dollar words. I know them all right. But there are older and simpler and better words, and those are the ones I use.”

In defending his writing style, Hemingway reveals a secret: small words are good.

Fancy words have their place. Sometimes, only a certain “ten-dollar word” will capture a specific concept. Sometimes, a long, elegant term is melodic and helps a passage to shine.

5. Only Use Dialogue Tags When You Need To

“Dialogue tags are the bits of writing that frame quotations,” he explained eloquently.

In the sentence above, “he explained eloquently” is a dialogue tag. Tags are unavoidable when your writing involves quotes, but they’re tough to incorporate smoothly. Awkward, forced dialogue tags are like big flags that scream, “I haven’t quite learned how to write yet!”

Hemingway teaches us that you can often skip dialogue tags. He often wrote long conversations with few or no tags.

As long as we know who’s talking, “he said, she said” is often unnecessary. When tags are needed for clarity, they should establish rhythm and provide additional information.

Dialogue tag usage depends on what sort of writing you’re doing. In journalism, tags usually need to be straightforward. In more casual article writing or fiction, you can play around a bit.

Find different ways to insert quotations. Insert some abruptly, others smoothly. Some with tags, some without. Some with colons, dashes, and so on. When a bit of dialogue feels clunky, keep trying new ways to frame it until you’ve ironed out the awkwardness.

“Show, don’t tell” is everything.

Telling involves saying that something is a certain way. Showing is the process of providing evidence. Anyone can say that a face is beautiful, that a child ran fast, or that a vacuum cleaner is the best on the market. To write convincingly, find the details — whether poetic or factual — that help the reader reach conclusions on their own.

Hemingway was a showing master. When he wanted to tell you something, he simply told you. In this way, the basic facts were there — but they weren’t weighed down by a bunch of claims.

Hemingway’s novella The Old Man and the Sea begins like this: “He was an old man who fished alone in a skiff in the Gulf Stream and he had gone eighty-four days now without taking a fish.”

In one sentence, Hemingway transmits all the information the reader needs to embark on the story. In describing the old man, there’s no subjectivity. The narrator doesn’t tell us if the old man is kind, or ugly, or wise. We’ll learn all that in the pages to come — through showing.

7. Make Up Your Own Rules

Short sentences and small words didn’t make Hemingway a great writer. Those were simply a few tools that he used to channel his creativity. He was special because he gave us interesting stories and fresh reflections on the human experience.

Hemingway was a student of literature and admired many writers. He also knew that to make his mark, he had to do things his own way.

Emulating experts is part of learning, but you have to break some rules to create something new. The best way to learn how to Write like Hemingway is to incorporate his guidelines into your writing — then pick and choose when to follow them.

While every page you write requires a spark of creativity, learning how to write like Hemingway will help you make the most of those sparks.